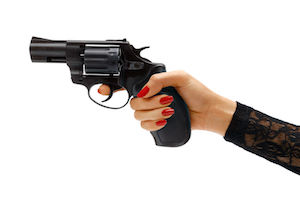 By its nature, robbery is a crime of violence. It depends on confrontation and the threat of force or fear. In Oklahoma, robbery is defined as the wrongful taking of another’s personal property from that person’s body or from their immediate surroundings by means of force or fear. Robbery with a firearm makes the risk of injury or death much higher. As a result, it is treated quite harshly under Oklahoma law.

In Oklahoma, robbery can be either of the first or second degree, with first-degree robbery as the more serious offense. Robbery is a felony in Oklahoma.

Robbery with a Firearm is Aggravated Robbery

Adding a firearm or other dangerous weapon can make a robbery deadly. It doesn’t matter if the firearm is loaded or not. Any weapon that looks real enough to raise fear in the mind of the victim is sufficient.

Committing robbery with a firearm puts the victim in fear of immediate death. If convicted of armed robbery, you could face up to life in prison. Okla. Stat. tit. 21 § 801

Robbery With a Firearm is Subject to the 85% Rule

Robbery with a firearm is a violent crime in Oklahoma. Therefore, it is subject to the 85% rule. If convicted, you must spend 85% of your sentenced time in prison before becoming eligible for parole. Okla. Stat. tit. 21 § 13.1

There are defenses available that you should explore with your attorney.

In order to be considered a robbery, the force or fear used must be used either to get or keep possession of the property from the victim or to stop or overcome their resistance to the taking. If the force or fear is used only as a means of escape, it does not constitute robbery. Okla. Stat. tit.21 § 792

While this may feel like a very small distinction, it is often enough to secure your freedom. Waving a gun as you are running away after you have taken the property, as opposed to pointing it at the victim during the robbery, may make a big difference.

If the taking occurs without the knowledge of the victim, there is no robbery. Okla. Stat. tit. 21 § 796 Thus, pickpocketing a wallet is still a theft, but a much less severe form of it.

Facts and their chronology are critical in these cases. Make sure to review the facts of your case with an experienced Stillwater criminal defense lawyer as soon as possible.

Wirth Law Office – Stillwater is here to help you when you need it the most.

We offer a free consultation with an experienced Stillwater OK attorney to help you defend your legal rights.

Call 405-673-1600 for a free consultation or submit a question through this website.